Hi dear all...this is a a mail from polarstern, send on the very next day after this incident, that was on March9 , 2009. 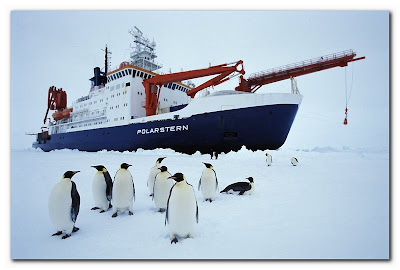 Hi...
yesterday we had a party on board to celebrate the success of the cruise ("LohaFEX" an Indo-German-Italian-Chilean collaboration cruise) , and everybody was dancing, and enjoying with music and with drinks. all of us were in a hall, the party started at 6pm and was supposed to be end at 2am(or more)..at 11pm the sea become rough due to the freek waves, and the ship crue turned the ship suddenly. then the ship started rolling at 45degree. In southern ocean, near the Antarctic peninsula these are quite common, but, we never expect such situation, then everybody fell down and started rolling from one end of the hall to the other end. the hall was abt 25m wide and we were going from one end to other, then to other end. all were in that hall including naqvi sir, victor sir(chief scientists) , and all the scientists and some crue members. the beer glasses were broken and all the glasses were spreaded on the floor, and the table, chair, everything were moving from one end to the other along with us. the whole incident was Up to 10 minutes, everybody started panicking, and the state of the hall was really terrible. four of us got injured,but not seriously. and victor sir was fainted and he became unconscious for a moment. we all thought that ship is going to sink. Thank god! nothing happened seriously. the important thing is´, we were on deck some moments back, and came inside to celebrate the party. nw everything is ok, and all are fine. any way it was an unforgettable incident.
regards
Sujith Panikar
Posted by തൃശൂര്‍കാരന്‍ ..... at 10:51 AM scan and read in your android device